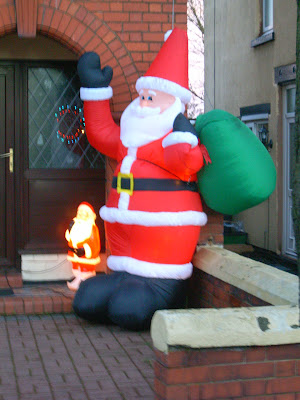 A little disturbing to see the sleigh-born benefactor himself accompanied by his smaller, but otherwise identical daemon, rather like Austin Powers with Mini Me. Still, at least he isn't dangling from a glittering rope outside the bedroom window, like most Santa Clauses these past two or three years. I wonder how parents explain to their children how Santa Claus is capable of reproducing himself in this indiscriminate fashion. It must be as hard to make sense of as - I don't know - the virgin birth.
Published by Charles Lambert at 23:27

Charles. Anyone can see that's a plastic model.

My mother explained to me early on that because Santa can only be in one place, he lets other people help out in the department stores and so on, gathering information for him as it were... I can remember feeling mildly disappointed that I wasn't sitting on the lap of the real Santa but I knew that what she said made sense.

It wold be terrible to think of the real Santa being so stupid as to get himself caught on a rope outside some kid's window, too. You'd find it hard to respect him.

I don't understand the significance of the big black balls there. Happy New Year!

Ms Baroque, you've made me feel so foolish. I rather like it.

When you're a parent, you find yourself saying things like, "Well, honey .... I believe in the idea of Santa."

Is a parent apparent?