A few weeks ago Rob at the Fiction Desk reviewed Any Human Face and, with great generosity, gave away ten free copies of the novel. One of the copies went to the man behind the book blog His Futile Preoccupations... You can see the impression the novel made here. Here's a bit to be going on with:

I had a bit of luck recently when I won a book give-away held by The Fiction Desk. The book, Any Human Face by Charles Lambert arrived and I almost immediately picked it up. I planned to read the back cover and perhaps a page or two as I had another book I intended to get to first. I ended up devouring this book in two separate readings over the course of a twenty-four hour period. The blurb on the front of the novel promises: A dark, fast-paced story of love, sex, abduction and murder, and the book certainly lives up to all those qualities.

Published by Charles Lambert at 13:52 No comments:

Clare Dudman, author of A Place of Meadows and Tall Trees (which I'm currently reading and wholeheartedly recommend - but more of that later), has interviewed me for her Sunday Salon on her literary blog, Keeper of the Snails. We talk about Any Human Face, life-changing moments and pride (with a small 'p'). You can read the interview here.
Published by Charles Lambert at 13:32 No comments: 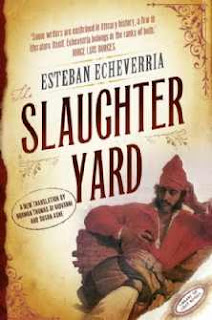 Assuming you know nothing of the work of the nineteenth century Argentine writer Esteban Echeverria, you can approach this book, one of the Friday Project’s Library of Lost Books, in two ways. The first is to cut to the chase and read the beating and rather bloody heart of it, the long short story, entitled The Slaughteryard, a vivid, in many ways chilling, account of a cattle butchering and its disturbing aftermath in one of the four slaughter yards of Buenos Aires during the first decades of the nineteenth century. It’s a powerful, and memorable, tale, packed with information and colour, observation and, above all, political indictment. Translated with enormous vigour by erstwhile Borges collaborator and translator, Norman Thomas Di Giovanni, and Susan Ashe, it provides an insight into a world that’s both recognisably modern and tantalisingly ‘other’, which is just what you’d expect from a classic ‘lost book’.
If you stop at the story, you’ll already have had value for money. If you decide to read the rest of the book as well, you’ll come away not only wiser, but also irresistibly entertained. It’s packed with gems: historical details about slaughtering methods, the use of the lasso, and, more worryingly, the mazorca (you’ll have to read the glossary to find out why this should be worrying, but Edward II might provide a hint), the practice known as the slippery dance, the other, less musical meaning of the violin y violon; and, underlying all this, the tragic oppression of one faction by another, in a Swiftian parody of political schism and reversal that, as these things tend to do, resulted in the deaths and torture of thousands. On top of this, you’ll have contemporary accounts of butchery in Buenos Aires by the famous, such as Darwin, and other less well-known travellers, such as a certain Major Alexander Gillespie, according to whom “negroes [...] have generally a predilection for food very salt, and even tainted”.
The book as a whole, in other words, not only introduces and contextualises one of South America's greatest stories, but delights on its own terms. I recommend it.
Published by Charles Lambert at 17:27 No comments: 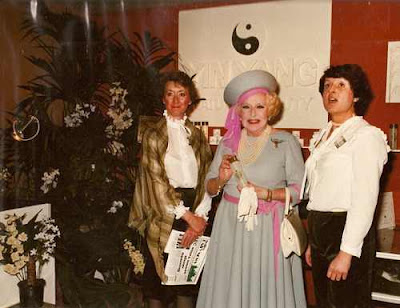 Is it just me or are the two people with Barbara Cartland in this photograph Peter Mandelson and Paul McCartney in drag?
Published by Charles Lambert at 15:27 1 comment: 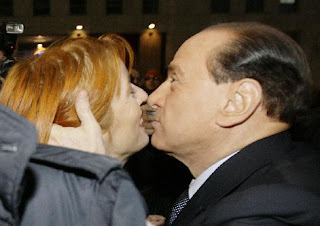 According to an article in today's Independent, Maria Vittoria Brambilla, the Italian minister for tourism (seen here discussing policy with her employer), has announced that the Palio di Siena, the traditional horse races that occupy the city's main square for much of the summer, should be banned, along with all other public spectacles involving cruelty to animals. Not because of their intrinsic violence towards dumb beasts, with whom Brambilla ought to feel, at the very least, a nuance of sympathy, nor because they provide a substantial source of revenue for the Mafia, but because they damage Italy's image abroad.
In the same newspaper, Christina Patterson has this to say about David Cameron and his putative political encounter with Silvio Berlusconi this week:

David Cameron has clearly been having a lovely time visiting his foreign counterparts, offering a little lecture here, a little pat on the back there and generally revelling in being one of the Most Important People in the World. If some of them can't quite match his background, well, one wouldn't want to make them feel awkward, and some of them – Obama, actually – have other qualities that make up for it.

But Berlusconi. Oh dear, Berlusconi. How the hell do you conduct a meeting with the biggest joke in international politics, a man so surgically enhanced that he now looks like a ventriloquist's dummy? How do you talk to a man who can't even have a snack without a bevy of luscious lovelies? How do you do that and retain a micro-molecule of dignity?

Cameron's solution to a challenge that might defy Debrett's lacked his usual lightness of touch. He turned up late. Almost an hour late. He skipped the planned talks and went straight to the dinner, and skipped a press conference, too. In the photos, Cameron weirdly managed to look like Berlusconi's taller, plastic twin. He also managed to look something he's rarely looked before: deeply, excruciatingly embarrassed.

Will this pleasure never end?

If any of you are lucky, or clever, enough to be able to read Arabic you can now enjoy The Scent of Cinnamon in translation, in the Albawtaqa Review.
For more information, click here.
Published by Charles Lambert at 19:30 2 comments:

Email ThisBlogThis!Share to TwitterShare to FacebookShare to Pinterest
Labels arabic, the scent of cinnamon, translation 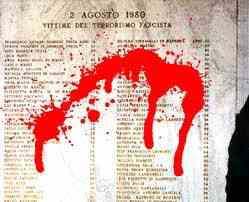 Thirty years ago today I was teaching English at a summer school in Malvern. The students, aged between 12 and 16, were mostly from Europe and the largest group came from Italy. They rarely watched the television - I don't remember now if they were discouraged from doing so or simply preferred to do other things; there are few things less interesting, after all, than watching TV in a language you barely understand, and most of the students there spoke very little English. But on the evening of 2 August the television room was packed with Italian students because a bomb had destroyed Bologna station. Some of the students came from the area; two or three of them had relatives who were starting their holidays that day and might easily have been involved. When the first images of the station, parts of which had been reduced to rubble, appeared on the screen, the room fell silent, and remained silent until one of the older girls began to cry, which set the other kids off. I wasn't the only teacher there who spoke some Italian, and we were kept busy translating the news as it came in. There were no satellite dishes then, no Sky; all we had was the BBC. Mrs Smith, the person in charge of the school and herself Italian, was also busy, comforting the younger children, organising sandwiches and coffee, phoning people who might know more. I'd been through Bologna - one of the busiest stations in the country - but never stopped there. I didn't know then that I'd be living only thirty miles away two months later, in what was still the aftermath of the event, an aftermath that continues to echo. Around 80 people, many of them children, died in the explosion; others were wounded, or blinded, or permanently crippled. Not to speak of the collateral effect of this kind of tragedy, friends lost and families destroyed. To begin with, the assumption was that there had been an accident, but that assumption didn't last. No one claimed responsibility for the attack, which was attributed to right-wing terrorists, on the grounds that left-wing terrorism was more selective. In the thirty years that have passed since then, people have been accused and convicted of the crime, and in some cases have completed their sentences and are now free. But no one genuinely believes that the perpetrators of the crime have been punished, or even identified. It's hard for me to read about the bombing without remembering the faces of those children - one of whom actually lost a cousin in the attack - stranded so far from their homes, frustrated by distance and language; children who might just as easily have been blown to shreds themselves. There's a commemoration of the event each year, organised by the families of the victims, and presumably this will continue as long as these families survive. Most years, whichever government is in power sends a representative or two, and the reaction of the crowd is a useful indication of public perceptions of guilt and the complicity of certain elements within the Italian power structure, or palazzo, as Pasolini called it. Few people doubt such complicity. This year, with a contempt that's hard to stomach, the government is totally absent from the commemoration - not even a deputy minister has been sent off to take the flak and express at least formal condemnation of the massacre. If proof were required of the continuity of responsibility - moral, if nothing else - that links Berlusconi and his gang to the people that murdered 85 innocent travellers and wounded a further 2000 thirty years ago, we need look no further.
Published by Charles Lambert at 09:46 1 comment: