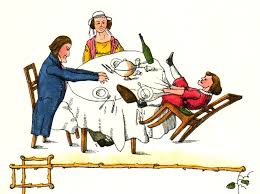 Want to know more about the man who wrote Struwwelpeter? Click here.
Published by Charles Lambert at 13:39 No comments:

I've just posted a review of Ishiguro's novel (not the film, which I haven't seen, and probably won't see) over at my other blog - the serious one I save for talk about books... You can find it here. And if you haven't read the book, or seen the film, try not to think too hard about the implications of the picture on this post. I wouldn't want to spoil it for you.
Published by Charles Lambert at 17:43 No comments:

Email ThisBlogThis!Share to TwitterShare to FacebookShare to Pinterest
Labels review

The woman on the left of this photograph - the one who looks as though she's just heard someone fart - is called Elena Donazzan. She's a ferventissimo Catholic and member of Berlusconi's Freedom Party (no, that's the political party, not the ones with 14 overpaid whores dressed as nurses and a gaggle of septuagenarian cronies who ought to know better). This is a contradiction in terms that ought to exclude her a priori from holding any sort of public office, but it appears to have become a criterion for it in some parts of Italy, as though hypocrisy were no longer an inconvenient truth of politics but its essential nature. She's responsible for education in the Veneto region, a Northern League stronghold. The Northern League isn't too fond of Roberto Saviano, internationally respected author of Gomorra, possibly because he's suggested that the north, and its politicians, is not only not immune to Mafia activity but is up to its neck in it, something the south-hating trolls of the Lega would rather not hear. So it's no surprise that Saviano's work should have been removed from the library shelves of the region. After all, what are libraries for if not to propagate the dominant viewpoint?

Now Donazzan, inspired no doubt by the invigorating scent of burning paper, has issued an edict to the region's schools announcing a further round of censorship. This time it's the turn of all those authors who signed a petition in 2004 against the extradition from Brazil of Cesare Battisti, an ex-terrorist convicted in absentia and on rather dodgy grounds of terrorist activity conducted in the 1970s. These authors are referred to, with audible distaste, as intellettuali, perhaps the dirtiest word in the Lega lexicon. What's odd though is that no one has seen fit to say who these blood-stained intellectuals actually are, neither Donazzan nor the newspapers, like Repubblica, that, while deploring the edict, exercise their own inadvertent censorship. So, in case you're interested, the list includes Daniel Pennac, Luther Blissett (now Wu Ming), Massimo Carlotto and Pino Cacucci. You can find a more complete list here.
Published by Charles Lambert at 13:01 No comments: