Evil, the banality of

Not the most attractive looking man you'll ever see, but there's nothing that distinguishes him from a thousand other petty bureaucrats, the kind of people you see in offices throughout Italy, helping or hindering their fellow citizens, as the case may be. His name is Massimo Sensini and he's the elected (Northern League) mayor of a small town called Fossalta di Piave, 40 miles north of Venice and the place where Ernest Hemingway was injured during the First World War. Among its 4000 inhabitants is a four year old girl of African origin,whose father, after years of working in the local industry, was recently made redundant and is now working in Belgium, sending home what he can to support his wife and four children in Italy. The little girl goes to the local school, called 'Il Flauto Magico'. It's an all-day school and the children have their lunch there, paying a certain amount for the privilege. The little girl's mother asks for help from the local authorities to pay for her daughter's lunches (she's already paying 50 euros a month for the teaching and other services provided). But the council can't help.

The teachers at the school - there are five of them, all women - decide to forego their own lunch in turns and give it to the girl. Everything's fine until the mayor hears about it from the social services. He summons the school principal, a certain Simonetta Murri, to condemn the 'gross irregularity' of the situation and accuse the teachers, effectively, of stealing council property through their 'misuse' of lunches assigned to them, an act that incurs 'a loss of revenue for the municipality'. The principal agrees. The teachers are told that if they continue to deprive the education system of five lunches a week, they will be disciplined. The little girl now does only half a day at school, going home for lunch and staying there for the afternoon, deprived of 50 percent of an education that she, more than anyone, needs if she is to belong to the country she lives in and to which her father has contributed as a worker and tax-payer in the past.

Needless to day, according to Sensini and Murri, this has nothing to do with racism. For Sensini, the lunches are part of the teachers' salary and it is illegal to auto-reduce one's salary. For Murri, all children are equal and what would she do if all her pupils wanted free lunches? Has anyone else asked for a free lunch? Well, no, not yet. The speciousness of these arguments is self-evident, but what strikes me most about them is that these two people, insignificant in themselves yet given the kind of responsibility over others that can make lives worth living or not, are behaving in the same way as other people, in other places and at other times, whose small, considered acts of brutality, sustained by an indifferent or conniving structure of power, have led to their fellow citizens being seen as less than human. Food's such a basic need, and the act of offering it such a basic human act, enshrined in all cultures as hospitality. How ironic that notions of law and principle and equality should to be used to rip an offered plate from the small hands of a hungry child.
Published by Charles Lambert at 16:38 2 comments:

Fancy something a bit creepy for the weekend? Need some advice? Click here.
Published by Charles Lambert at 11:26 No comments:

Email ThisBlogThis!Share to TwitterShare to FacebookShare to Pinterest
Labels review

Want to see what I've been up to recently? Well, here it is.

Published by Charles Lambert at 15:01 No comments: 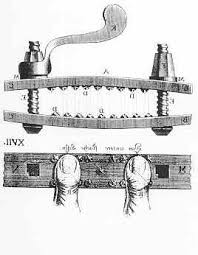 If you want to know what this instrument of torture has to do with Any Human Face, click here.
Published by Charles Lambert at 23:41 No comments:

Girls made out of flowers, brothers becoming beasts and breeding, David Beckham an object of blind irrational worship. What is the world coming to? Find out here.

And if you want to see some seriously demented whimsy, google for images of Blodeuwedd...
Published by Charles Lambert at 10:37 No comments: