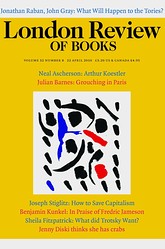 Every fortnight, from June 2010 to June 2011, a copy of the London Review of Books fell onto the stone floor of my house in Italy. It lay there until the person who fed the cats took it upstairs with the rest of the post and left it on an ever-growing pile on the kitchen table. I was in England. I could have changed my address but I had no idea how long I'd be away from home and it seemed an unnecessary fuss. Besides, I liked the notion that my copies were arriving, as they were intended to do, in my own house, as though their presence, in some odd way, represented me, and my normal life, which had been disrupted. I've been subscribing to the LRB since 1997 and, for the first seven years, my parents would give me, as part of my Christmas present, one of the rather solemn dark blue binders the LRB produces to put them in. I can't remember why this practice stopped and, in one way, I'm sad they did. The librarian in me, the part of me that wishes the binders had a space to write the year on the spine, would have liked to see the years add up in such a formal, discreet and ordered way. Since then, back numbers have been allowed to accumulate on the bottom shelf of a bookcase and have now reached the height of a milking stool. Before my stay in England, I would unwrap my copy as soon as it arrived and look through it quickly, to see what might benefit from being read at once and what might wait, and to admire Peter Campbell's cover illustration, one of the principal and most reliable joys of the review. What's extraordinary about Campbell's work is how, despite its almost infinite variety, it's so obviously his; whether the colours are bold, as they are in the one I've chosen here, or tenuous, whether the image is abstract or figurative, his hand is unmistakeable. One of the reasons I think I will find it very hard to throw away old copies, assuming I ever do, will be the loss of these covers, something no online archive can ever replace.

Now, as I work through the backlog in chronological order, a year late more or less to the day, I'm enjoying a sort of double vision of the past twelve, indeed, fifteen months. The actual reviews are pretty much untouched by this. After all, it often seems to take the LRB a year, if not longer, to get round to looking at a book (which means I live in the, albeit fading, hope that, one day, one day soon, Any Human Face will be given a page or two - Jeremy Harding, are you there?) My favourite contributors - Diski, Castle, Kermode, Campbell (again) - don't suffer in the least from being read twelve months late. It's the current affairs pieces that are both here and now, and there and then. There and then because the writers are talking about the future and the predictions that articles of this type routinely and necessarily make can now be checked off against events, and found, reassuringly often, to be spot on. But also here and now, because what they have are insights I didn't have, or don't remember having, that continue to inform and deepen my understanding of the present and beyond. It's worrying, but also perversely comforting, to see how often the direst forecasts have already turned out to be true. (I'm thinking Lib Dems and painting oneself into corners here.) To provide a little balance, of course, there are also several assertions about the future made with an assurance that would silence anyone and yet are so totally off-the-wall as things have turned out that their authors must be writhing with embarrassment and wishing what's written could be erased forever. (I won't go into detail here...) And, of course, there are massive gaps (although I may just not have reached the relevant issue). The imminent collapse of the Euro. The Arab spring. But whether what is written turns out to have been accurate or not, there's a lovely sense of eavesdropping on a conversation you've only just missed - if that were possible - or can't quite join, that illusion of depth that tricks of perspective inevitably provide. What I want to do now is slowly, slowly close the gap between then there and here, between then and now, as the year away is slowly absorbed, and made sense of in ways that not even the LRB can finally help with.
Published by Charles Lambert at 13:39

Email ThisBlogThis!Share to TwitterShare to FacebookShare to Pinterest
Labels lrb