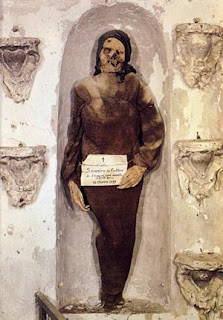 Well, what an unsettling experience. Our last afternoon in Palermo and we found ourselves up near the Capuchin monastery, the one whose catacombs are filled with the dried and mummified remains of some of Palermo's most important citizens. Originally, the catacombs were reserved for friars, the first one - Silvestro of Gubbio (see right) - being placed down there in October 1599. More recently, the tunnels beneath the convent became the place to be - and be seen - for the cream of Palermo society and I've no doubt large sums of money changed hands before the defunct were allowed in and prepared for eternal display. It can't have been a pleasant process, if the description at the entrance is at all accurate. The bodies were seated on marble racks in a room called the colatoio (the dripping or draining room), which was then sealed hermetically until the perishable parts of the body had putrefied sufficiently to drain away and gather on the floor underneath. The corpses were then removed to another room, the drying room, where they were cleaned with vinegar and dressed, often in clothes of their own choosing, before being inserted into niches in the appropriate section and held in place by a wire at the neck. Some bodies have been replaced by straw-filled sacks; others, like Silvestro, have arms and even legs. Some have been embalmed - a two-year-old child who was placed there in the 1920s might have died last week.
All in all, it's a peculiarly dispiriting and discomforting place, perhaps because so many of the ideas behind it are foreign to us, and find us ill-equipped to deal with them; we're surfeited by so many ways of not seeing the dead that to have them ranked before us in their hundreds, dangling from their hoops of wire or stacked, in some cases appearing to strain forward as if to press home the question of our being there, is an assumption of intimacy we're not prepared to take on. I'm not sure what I expected, but what came to mind first was the banality of it, the déjà vu of it. These dead resemble heavy metal sleeves and George A. Romero extras; if you stare at them too long they seem to move. Some of them have crumbled into semi-dust, others are almost intact. The saddest ones, for me, have wisps of hair and moustaches. Those skulls that retain their covering of skin often appear to be howling, presumably the result of the skin shrinking and pulling their jaws open. These bring to mind the almost dead of the camps, the shamelessness and the desperation of those faces as the allied troops rolled in. It's both hard to remember and hard to forget that what we are looking at are human beings who have died. But, after the shock and the thrill and the fascination, what struck me most was the indecency of their display, of their desire for it, and of our attention. It's not a moral or spiritual lesson - I don't feel it taught me anything useful about how to live or die - so much as one of decorum, which is being offended. Every third corpse or so a sign says NO FOTO NO FILM but this doesn't seem to deter anyone, and is presumably only there to increase the sale of postcards in the shop above. In any case, the people who chose to be preserved here would probably have welcomed an audience.
Published by Charles Lambert at 12:59

Ah, the fascination of what's repulsive.

It's both hard to remember and hard to forget that what we are looking at are human beings who have died.

This rang so true. Great post, thanks, Charles. I've often wondered what it's like in these places. Did it smell?

No, it didn't, Anne! Fortunately.