But who will protect us from our protectors? 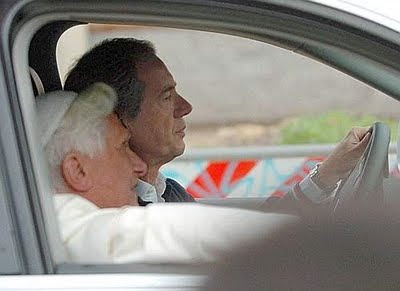 Guido Bertolaso, the head of civil protection in Italy, looks like turning into the gift that keeps on giving. After being flown to Haiti by Berlusconi to offer his expert advice, he upset Hillary Clinton by calling US aid to the country 'pathetic', only to be contradicted by the Italian foreign minister, Franco Frattini, on behalf of the government. As head of said government, Berlusconi's typically diplomatic response was to pat the man on the back and promise him a ministry, at which Bertolaso had the grace, at least, to cover his face, probably to hide his satisfaction.
Now it turns out that the megalomaniac buffoon's favourite superhero - Rubbish in Naples? Send Bertolaso! Earthquake in Abruzzo? Send Bertolaso! Cat stuck up a tree? Send Bertolaso! - isn't Mr Clean after all. Tapped phone calls have revealed a richly flavoured stew of corruption, fixed tenders, jobs for the boys and the brothers-in-law, with, as a spicy topping, the usual scattering of whores, escorts, masseuses and pimps (see photograph). Bertolaso denies it all, then most of it, then says that it was all too much for one man. He's on TV every night, bewailing the injustice of it all and insisting that everything he's done he's done for Italy. This clashes with a comment he was heard to make while 'solving' the rubbish problem in Naples, to the effect that an emergency stopped being an emergency when the TV and press stopped talking about it, a definition Haiti would do well to remember.
The shit has hit the fan just as the government was about to pass a law that redefined Italian Civil Protection as a Società per azioni, i.e. a public corporation quoted on the stock exchange, with Bertolaso as its natural CEO, thus removing any shred of accountability other than to its shareholders. Given that Berlusconi has been using the civil protection apparatus, and Bertolaso, for such unlikely activities as building the Pharaonic structures originally intended for the last G8 summit and the world swimming championships - a beanfeast for the construction companies involved but hardly natural emergencies - the new law didn't seem that much of a big deal; it merely legitimised the status quo. These latest developments have cast the law, and Bertolaso's saintly dedication to the national good, in a different light.
Published by Charles Lambert at 12:12

The picture reminded me of a joke about the previous pope's visit to Ireland. His plane is diverted, so the chauffeur is sent to pick him up at the other destination. The pope emerges, is met by the nervous chauffeur. The pope admires the car. He says to the chauffeur -"this is a beautiful car. I never get to drive these days. Do you mind if I drive?" The chauffeur can't say no, so the pope then drives them off with the chauffeur in the back, and is soon touching 100 on the rural Irish roads. The inevitable happens, and he is pulled over by the Garda. The policeman asks for his ID, and the pope hands him his passport. The policeman then gets on the radio to HQ: " I've just pulled this guy over for speeding. I don't know who he is, but he must be bloody important - he's got the feckin pope driving for him!"