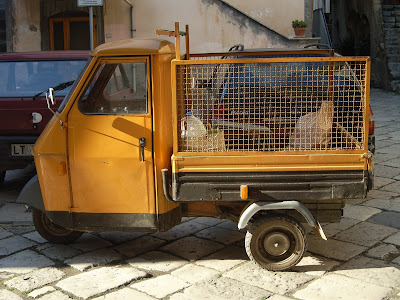 In Italian the word ape means 'bee', but it's also the name of the type of vehicle in the photograph above. It's a 50cc moped engine with the body of a small van or, in this case, truck, grafted on to it, and it's been the preferred means of transport in rural Italy and, I imagine, in much of rural Europe for decades. Most families that have lived in the centre of Fondi for a generation or so have a piece of land outside the town, which they use to grow their own fruit and vegetables and a little extra to sell, often from their front doorsteps, with the aid of the primitive sort of scales personifications of justice tend to hold, and Api are what they use to get themselves and their produce from one to the other.
Api are still pretty common in Fondi, although you rarely see anyone under 50 driving one - they're more comfortable in Smarts or ludicrously oversized four-wheel drives. Yet even those people who have moved up to cars drive them as though they were Api and obeyed the altogether less stringent rules applied to them, turning and braking without warning, stopping mid-lane to chat with someone coming from the other direction until someone else's patience finally wears out and horn pressure is applied. This generally works. It's hard to work up a genuine road rage if what you think you're driving is a jumped-up moped.
The front seat of an Ape is really designed for one but, under certain conditions, there's room for two and it struck me recently how perfectly suited Fondani were to meeting these conditions. Essentially there's room in the cabin for a big person and a little person and as Fondani age a sort of natural process of adaptation takes place to make them fit. The women grow larger and rounder, a mixture of hard-earned fat and muscle, while the men wither down into a hank of sinew topped with a cap. The bigger the woman, the smaller the man. This symbiosis not only makes Ape travel feasible, it also reinforces the heterosexual model of rural life: one man, one woman, one Ape. Two men would rattle around inside the cabin like dried peas in a can. Two women simply wouldn't fit.
Published by Charles Lambert at 10:34

Email ThisBlogThis!Share to TwitterShare to FacebookShare to Pinterest
Labels italy

You are so right. We observed these on our visit to Tuscany last year, and coveted one.
Rarely saw the double occupation, though several people loaded in the back a couple of times.

Yes, and they're even used as taxis on the island of Procida, just off Naples, where the roads are too narrow for anything else.

Ah, tuk-tuks! An entrepreneur sells early morning coffee from one at our local railway station here in rural Cambridgeshire.

In the last few years there have been attempts to introduce them as cheap city taxis in places like Edinburgh but I don't know how successfully.

I seem to remember someone selling coffee from one near the Angel, Islington, as well. And there's a great pie stall in Upper Street that... and now I'm getting distracted...