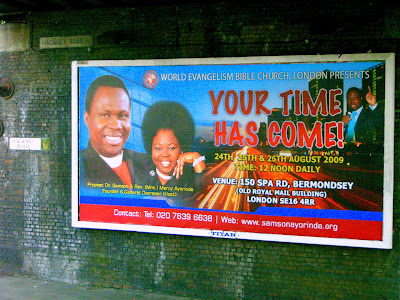 Published by Charles Lambert at 14:40

Judging by the smiley faces it's meant to be a good thing. But is it?

I don't think so for a minute, Barbara! I took a look at the website of this couple and among the most prominent features are the bank details in Nigeria and the Paypal icon, so that you can give, give, give. What struck me most, though, apart from the pernicious evangelism, was the weird disparity in size between the two. They look more like ventriloquist and dummy than man and wife. There's also an hilarious interview with the woman in which she says that God blinded her to her future husband's acne so that they could fall in love and conduct their mission together... And I've already devoted far too much time to this couple!